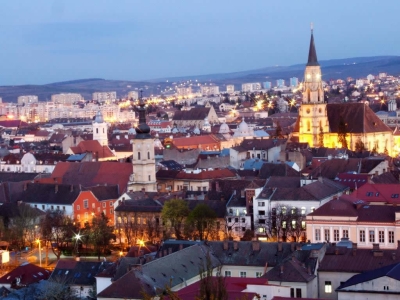 View of Cluj-Napoca city, from the Fortress

The historic capital of Transilvania, Cluj-Napoca is approximately 200 miles (320 km) north-west of Bucharest in the Someşul Mic River Valley. In the Middle Ages the name of the city was Culus, as attested in documents dating back to 1173, but by the beginning of the 15th century it was known as Cluj. The name Cluj, comes from the Latin 'clusum', or closed, due to the city being surrounded by the protective and beautiful foot-hills of the Carpathian Mountains. The city is also known by its German name, Klausenburg, and its Hungarian name, Kolozsvár.
In 1920, after the Tri-anon Peace Treaty, the region of Transilvania was officially joined with the Romanian State. Today Cluj is a thriving commercial and cultural centre.

Asociatia Bridge Language Study House is a private language school. Bridge LSH’s activities began in 1993, and was the first established language school in Cluj. Bridge LLSH provides language training courses combined with cultural issues and activities for people of all ages. Courses are delivered throughout the country, at one of our established centres in Cluj, Satu Mare and Oradea. Bridge LSH also delivers courses in the workplace and organizes several residential language camps for children each year.