The finding of Aphrodite on Milos has an interesting story. In 1820 a local farmer, whilst working in his fields, came across a hidden cave wherein he discovered a statue, the form of a beautiful young women, which according to local legend he was rather smitten with, he took her home and kept her in the cellar where he spent most evenings admiring her, this gave his wife cause for concern! And she complained to one and all about her problem hence the arrival of the authorities! Then a young French naval officer observed the Venus and considered her to be an important find, after some negotiations between the Bavarians and the French she was sold to France and was packaged and taken to Milos harbor Klima for shipment (here there are various stories of where her arms may have broken off, perhaps in the sea at Klima). 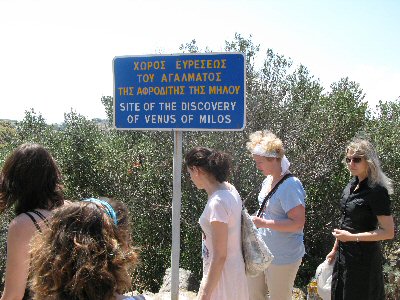 There is an excellent copy of the copy at the archaeological museum of Milos whilst the original statute of the Venus can be found in the Louvre Museum, Paris.  The Venus is dated to the third century BC in the Hellenistic period and was most likely decorating the Ancient theatre nearby the location of her finding. Today’s Milos initiatives are envisaging to create a more impressing representation of Venus’ finding location with a virtual connection to the original statue in Paris.